The Royal Pasta made in Le Marche 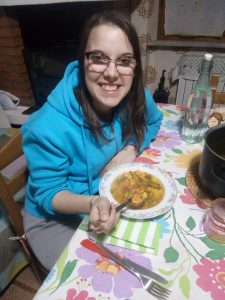 I am very happy with a dish of pasta reale!

Usually when we say pasta in Italian we mean a whole world that may not seem so easy to understand to people not used to it. Pasta is not only the dried one, made from wheat, but also the “fresh” one, usually made with egg. This is what makes it also more flavoured, and exceptional for days to celebrate.

Today Mamma Graziella is going to show us how to make the so-called “Pasta reale”, which translated means “The Royal Pasta”. The name changes according to the house we are going to be invited to. In addition to pasta reale, it can be called also pasta imperiale, pasta al sacco, minestra dell’imperatore, minestra colorata, that is to say “Imperial Pasta, pocket pasta, Imperial soup, or coloured soup”. They all sound very poshy, don’t they?

The history behind it is quite blurred (as always, when it comes to the origins of a traditional dish), and the name may recall the difficulty in getting the ingredients (such as parmesan and butter), hence the possibility only for royal families to eat it, or even the fact that this kind of pasta was brought by the Austrian courts at the time of Maria Luigia, wife of Napoleon I to the region of Emilia-Romagna, near Le Marche.

Nonewithstanding the origins, the result is really worth a try. At least, as you can see I really appreciate it 😉

Ingredients
For the yellow dough:

For the green dough:

Preparation
First of all boil the carrots and the spinach, and melt the butter. Start with the yellowe dough: in a bowl beat the eggs, together with Parmigiano, semolina and melted butter. Place the dough into a baking tray and cook it for about 35 minutes at 180 degrees.

Prepare an identical dough, but add the drained spinach. Pour into a baking tray and bake it!

The red dough will require the yellow one, the boiled carrots and the tomato paste.

When the dough are cold enough, cut them into strips and then into small cubes. Mix the little cubes and cook it together with the broth!

The perfect broth to have it with is the hen broth (that is to say, cook the hen in boiling water for a long time and with carrots, onions and cloves), but if you don’t have time to prepare it well in advance, you can also eat it with the normal broth. Pasta reale can be frozen and eaten from the freezer directly to the pot!

Ecco Le MarcheCrema is custard in English, and cremini can be translated as “fried custard”. Nononono don’t leave this post just yet, I haven’t turned crazy! This is really something that we are very prouf Read more…