Astoundingly enough, we discovered a happy ending love story in Le Marche’s history! Do you remember the past ones we talked about for our yearly S.Valentine’s post? They were all real tragedies… Paolo and Francesca in Gradara, Piero and Sara in Pierosara and Antonio and Laurina in Torre delle Palme.

This year, our love story takes place in Cagli and, although the beginning was no bed of roses, it has finally a happy ending. You are about to read a beautiful story, that you can also follow on Cagli’s map (in the text, we stated the number of the city map behind the relevant buildings.).

On a cold winter’s day, on January 22 1826, a young doctor called Vincenzo Piccinini was riding his horse approaching the imposing city gate of Porta Massara of Cagli (15). He had been appointed as a general practitioner for this municipality, although his dream was to work in Rome.

Although upset, his mood improved considerably upon entering Cagli, especially when he noticed the imposing tower (14) from the Middle Ages.

Cagli wasn’t Rome for sure, but he could not stop staring at the beautiful palazzi, narrow quaint streets and majestic churches … would Cagli bring him luck?

In the end, he got used to his new life in Cagli and turned out to be a good doctor. A few months later, on October 22, he was summoned to Palazzo Ugolinucci (7) at the request of the rich master of the house Nicola Ugolinucci.

And this palazzo was where it happened: Cupid shot his arrows at him and the beautiful Lucia, the daughter of Nicola. It was love at first sight, as every fairytale is. But love was not easy for our lovers: Lucia was already engaged to a colleague of her father, and the engagement could not be broken or she would be banished from her family.

Vincenzo, the young doctor, did not give up so easily… sure he knew what a clandestine marriage was! On the night of December 15, the young couple crept along with 2 witnesses to the parish house of the San Bartolomeo church (19 and 20), where Pastor Don Gaspare had long been sleeping in his bed.

With the excuse that they urgently wanted to speak to the priest, they were allowed into his bedroom. They really startled the priest, that couldn’t help himself but silently listen to the couple. Vincenzo solemnly declared in the presence of the witnesses: “This is my wife” and Lucia replied immediately: “This is my husband”. Upset, the next day Don Gaspare immediately rushed to the Bishop of Cagli.

Rules didn’t go easy on our Vincenzo that was immediately arrested, with Lucia desperately jumping around his neck. The story is not finished yet, because it then became a partisan issure: on one side, part of Cagli was cheering for the couple, while the others were demanding even more severe punishment.

Miraculously, the Vicar pronounced fairly lenient sentences: the 2 witnesses had to sit on their knees throughout the High Mass; Lucia was ordered to live with her cousin without being allowed to leave the house and Vincenzo, finally, had to do penance in the Saint Andrea Monastery (32) and 100 scudi fee.

Once the sentences were met, the loving couple got married and lived happily ever after.

This route is part of the Itinerario Romantico (Romantic tour) of the province of Pesaro-Urbino.

Just like the young doctor of the 19th century, Cagli overwhelmed us with its intact medieval structure, the narrow streets and the remains of its rich history. Definitely worth another article! For the time being, we give you a hint of the historic, colourful and magic atmosphere particularly for Valentine’s day! 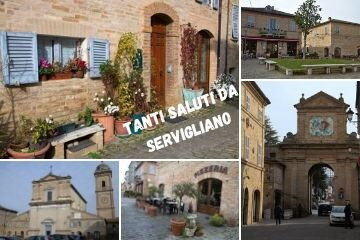