Sometimes you are on your way to a destination where you unexpectedly discover a gem which is worthwhile to be examined. On the way to the Eremo of San Cataldo in Esanatoglia (see earlier), we found the castle village il Castello di Collamato high on a hill. At the entrance gate, a beautiful sign welcomed visitors to this 14th century suburb of Fabriano.

Once through the gate, the original wooden doors were still open,

we ended up in a small round medieval piazza with the communal water tap still in the middle. The Saint Paterniano church was clearly more recent than the rest of the buildings; indeed above the church door it stated that the church was built in 1827 to replace another church which used to be here.

I think you can feel the medieval atmosphere even from these beautiful photos Isabelle took. In the summer, the residents were sure to sit and chat outside in the evenings while the children played on the square. Although the quiet atmosphere was tangible, the village is still clearly inhabited if you look at the curtains, the hangings, the plants and a bicycle.

We followed the small Punto Panoramico through the alleys, to end at the backyards of some houses.

The residents looked straight at the Apennines with the 13th century Saint Justinian church in the foreground.

One modern sign stood out: it is strictly forbidden to hang the laundry in places in front of the public….

It seems quite ironic to see such a ban when you think about the iconic image of Italy: balconies with laundry hung..isn’t it? In any case, despite the ban, the villagers seemed not to care much about that… .the laundry was drying cheerfully in the sight of everyone and the gentlemen / ladies of Fabriano were still miles away.

Collamato used to be a real castle representing the power of the mayor and his 4 counselors from Fabriano for centuries. Early in history, people read the name Coldemato or Coldemati, the hill of Mattia, the family that owned it. Due to its strategic position, situated at an elevation (502m) on a hill, it was often the reason for numerous disputes between the mutual areas. In the 13th century, an agreement was reached between Matelica and Fabriano whereby Collamato became definitively one of the latter

Before the unification of Italy in 1861, it would even have been a comune appodiato of Fabriano for 21 years; a statute that many rural villages, which were part of the Papal States, received. A certain autonomy was maintained with regard to the main church and was often administered by a clergyman.

We stepped out of the gate, glad we made the effort to stop and visit the castle village.

A tip: the still original wooden gate doors contain mysterious signs, a large letter O with an M and a cross in the form of the Greek letter T. Some say that the Templars were here: Ordine Militiae Templi. Or was it rather a signature of a merchant family…?

2 km further towards Cerreto d’Esi is the pilgrimage church of Saint Anna with 15th century frescoes, but was unfortunately closed. We will come back another time! 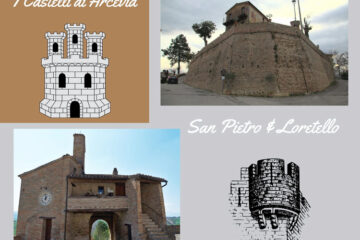 Ecco Le MarcheMy first “field trip” after a very long time was at the beginning of 2021 with Isabelle. Finally I got to see my beautiful hills again! We decided to drive to Loretello, one Read more…