Isabelle and Elke at the Photowalk in Porto Recanati 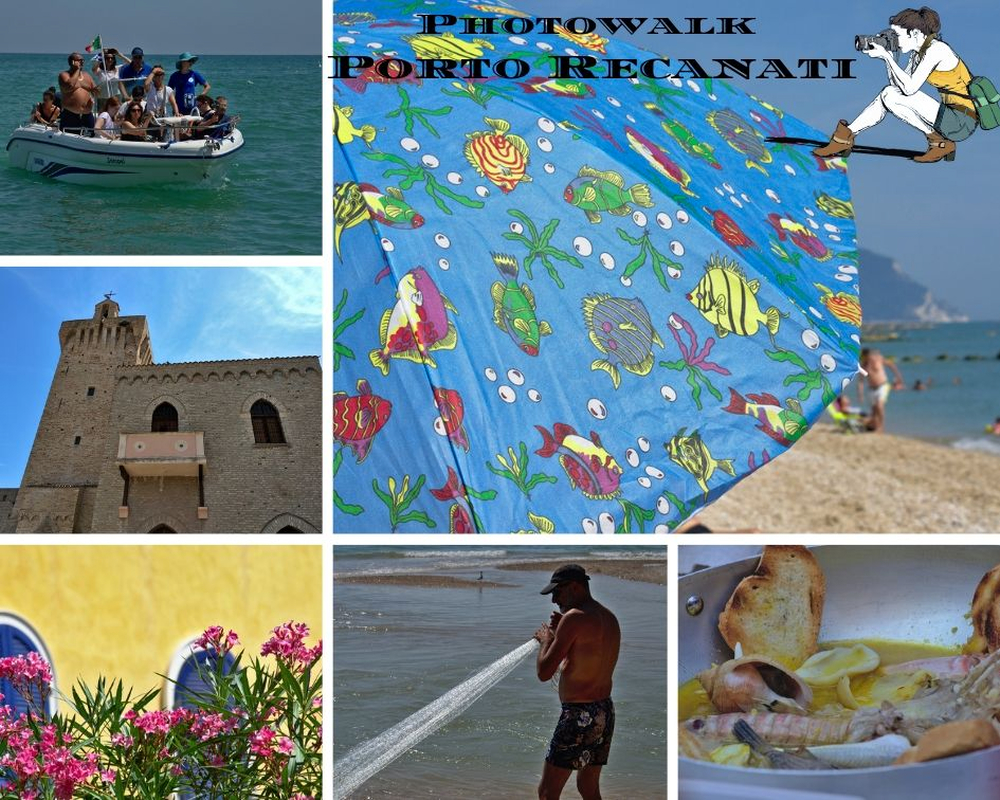 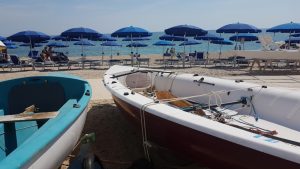 We promised another photowalk day, and here we are, or actually, here they are. My fellow writers Isabelle and Elke (together with their partners and other bloggers from Le Marche) joined the last photowalk into the seaside destination called Porto Recanati.

Reaching (and finding a spot for the car) Porto Recanati is quite easy: right outside the centre there is a free parking lot from which you can easily access the pedestrian area.

Our explorers, Isabelle and Elke, started the day with the Ambassadors of le Marche (to whom we actually belong, but it still feels like a dream to say it out loud), direction beach.

According to the them the walk to the beach is very far from the usual railway and cars, it rather looks like a beautiful beach promenade, only accessible by pedestrians and by cyclists. 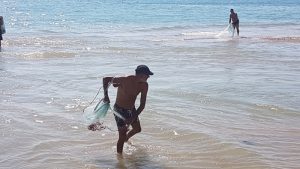 The first appointment was with a few fishermen. They actually fished early in the morning but now they were ready to give a demonstration of how people could catch fish without boats near the beach with a special tool. This is called Seraglio (or rezzaglio): a kind of circular fishing net that is thrown out by hand. It is an old fishing system that the fishermen used when they got their daily bread from the sea. But even now in Porto Recanati, at the mouth of the river, it is still being practiced as a sport or pastime. A very peculiar moment to watch those men busy with those very large nets (circumference of which is about twenty meters). 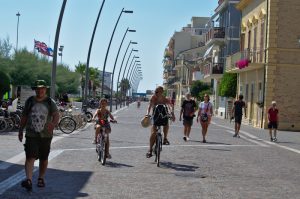 Via the beautiful boulevard it was then time to head back to the centre of Porto Recanati where the numerous old fisherman’s houses have been refurbished in a nice colour. Nowhere is to be seen a high gigantic building by the sea, that covers the beautiful panorama..what a relief!

A short stop at a giant metal wheel underlined the importance of a monument there to commemorate what was once the biggest employer, namely the cement factory Scarfiotti ….. The wheel was once part of a huge cement mill. 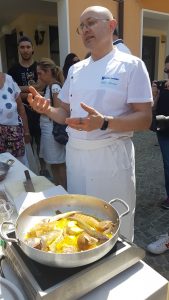 And now show time..or better, cooking show time! On Piazza del Borgo, two chefs from the Accademia del Brodetto. Brodetto is the traditional dish of the coast of our region. But every little villages has its own variety, and of course Porto Recanati is one of them. There are four major Marchigian resorts that claim to be the capital village of the brodetto: Ancona, San Benedetto, Fano and Porto Recanati. In Porto Recanati they add, unlike the others, no tomatoes or shellfish. Their special ingredient is the saffron glands dissolved in water. It used to be a too expensive element and is therefore often replaced by zafferanella or zafferanone (a wild Conero saffron) which gave the dish a yellowish color. The participants all diligently took pictures, saw the different preparations, but unfortunately couldn’t taste…better for me, because I started to become jealous 😉

Next stop is at the Svevo Castle, located on the square of Porto Recanati. The castle was built in the 13th century with the function to protect the coast of Recanati from attacks by pirates. Indeed the first inhabited city center developed inside it. The name Svevo was derived from Emperor Frederick II, who was also King of Swabia (Svevia in Italian), who in 1229 donated the grounds on which it was built. The main tower had originally a quadrangular plan, today with an octagonal plan, was built in front of the entire fort. There is a security corridor on all walls that was used for surveillance and protection from above.

The large courtyard currently houses the “Beniamino Gigli” arena, named after the famous Recanati tenor, where all sorts of performances take place in the summer. 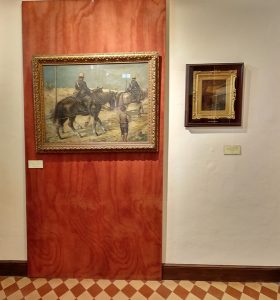 Inside the castle there is the museum of paintings with works of art from the mid-19th century: according to the Macchiaioli style, the forerunner of Impressionism, where people mainly worked with stains and did not align everything nicely. In particular, everyday scenes were painted, as well as portraits of the common man and also images of the war during the Risorgimento that led to the unification of Italy, after all many painters had fought in this struggle.

Last but not least, the visit of the tower, from which there is a beautiful view.

Last activity on this sea-photowalk could not be but a boat sailing. This was in collaboration with the Zee Liga and the municipal Civil Protection. I am sure Elke and Isabelle enjoyed it very much, on such a hot day. They sailed into the sea and were able even to admire the sea turtles and beautiful jellyfish with a purple border. However, the boat was too fast to photograph them, at one point even reaching full speed.

Back on the beach, the organization treated them to a cooling aperitivo and then pampered their grunting stomachs! Plenty of choice there is on the beautiful boulevard, at l’Uomo del Brodetto they were in the right place. Delicious fish dishes eaten, a nice ending to a fantastic day.

A nice walk in Serra de' Conti with Isabelle
"Brus'ketta" as you never said (and eaten) it before!

Nonna Franca
With Marchecraft into the colourful world of natural dying