A new life for the composer Niccolò Bonanni

It’s always the same story in every noble art: we know the prodigious artist, but nobody remembers the master beyond him. Niccolò Bonanni shares the same (unlucky) destiny of many important masters: he was the teacher of the famous composer Gaspare Spontini, who would once shine at the court of Napoleon.

Even music experts have rarely heard of Bonanni; somewhat unjustified though, because he was a chaplain, the organist in the San Leonardo church of Cupra Montana, a gifted composer of liturgical music and an excellent music teacher. We can’t say what lacks in his life to make him famous at that time!

Born in 1737 in Fabriano, but soon settled in Cupra Montana, he remained among the hills of this little village, where since 1600 there was a famous music school for singing and instruments. He died on July 13th, 1821.

In 1833 the then mayor celebrated the Master with a memorial stone: 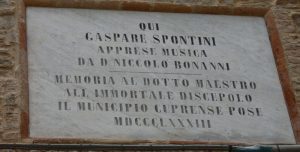 But why are we talking about Niccolò Bonanni today? Because last year, on the local Archeological Club, Heemkundige Kring, one of the volounteers, discovered the never-played scores of the maestro.

The discoverer has eventually decided to have these pieces performed together with the municipality and other organizations. It wasn’t so easy, though. Because the scores had had first to be written out for choir and orchestra, whose task was for the violinist Cristiano del Priori.

On June 30th a part of that music will be performed, in the San Lorenzo church of Cupra by the Astral Ensemble with instruments from that period and the choir Vox Poetica di Fermo.

The name of Niccolò Bonanni remains still nowadays: the marching band of Cupra Montana has his name since 1922, and in 1951 a street was named after him. 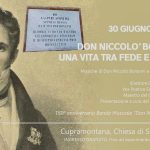