Magnalonga, aka eat all day long! 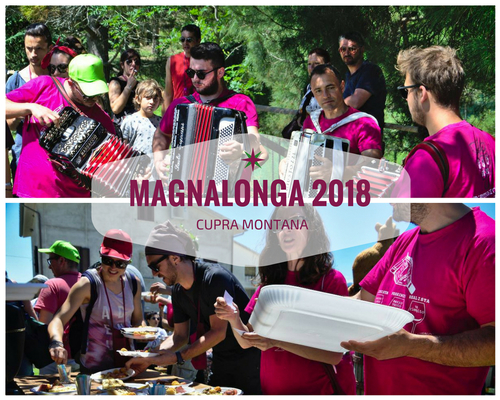 You may have realized so far how tight is the bond between Le Marche and the food. Well, besides every local sagra that you can find on every summer weekend, we also have an amazing gathering with a evocative name: Magnalonga.

Magna is the dialect for eat, and longa the dialect for long. You get the gist of it. The event consists of a long walking tour with many (many!) stops and much (much!) food awaiting for you. One Magnalunga takes place in Cupramontana, and it is organized by the local Folkloristic Group and the marching band, which provides also some good and traditional music.

Prior registration is usually required in order to better organize the stops and, most of all, to have enough food for all the participants. This year Magnalonga in Cupramontana received 300 registration forms.

Meeting time was at 10am: to boost the start panini with lonza and prosciutto were welcoming the guests. For the bravest there was already a glass of Verdicchio wine waiting! All filled up, people started the walking tour to the first stop: a real agriturismo, offering aperitivo, wine (of course! it was their own production) and musicians making a good ambience all around.

After the aperitivo come the antipasti, eaten on the yard of another typical farm. Frittata, focaccia, chicken, zucchini and the famous olive all’ascolana were the perfect way to take the refreshments. For some of you this may sound like a complete meal, but that was only the starter!

Next stop was the most difficult one: a steep road getting to the old brick furnace! But the reward was definitely worth it: pasta with either a red sauce or in bianco (without tomato sauce), and guess what else? Wine, of course. And some traditional songs and dances. 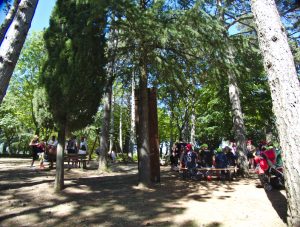 The second course was waiting the participant in the fresh (and not as warm as the other places) Colle Elisa Park. While the children were enjoying the playground, adults could taste delicious BBQ meat accompanied with gratin vegetables. And also some fruit to freshen up a little bit!

But a meal in Le Marche cannot be completed without a dessert. Going back to the centre of Cupramontana there were not only many kinds of pastries, but also, guess what? WINE, of course. This one was a particular one, because it is a wine made from sour cherries, called visciola. And in the meantime the bell just started to ring to mark 7 pm! 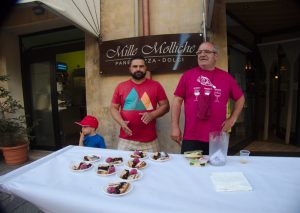 Being on holiday in Le Marche, you should definitely pay attention to where and when a Magnalonga takes place, because it is a perfect mixture of good food, music and a little bit of sport not to feel guilty!

For this season we can recommend also the one that takes place in Fabriano on the 23rd of June.

A little change to our calendar
A free, 100% natural oil